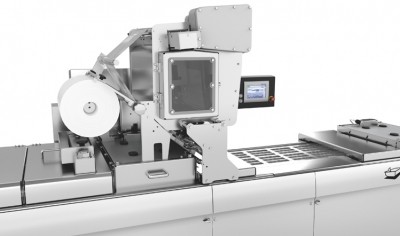 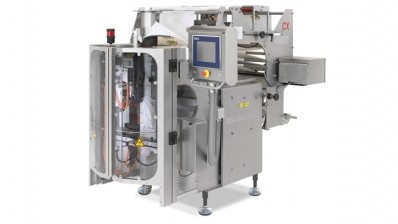 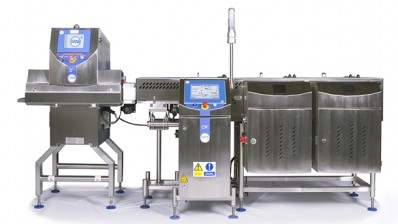 Frozen and chilled ready meals and food-to-go can now be inspected using a combination X5c X-ray and checkweighing unit from Loma Systems, which has been developed with these uses in mind. 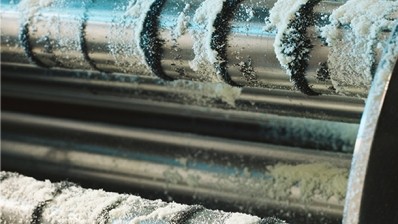 The Hydrohansu-type rotating cleanflow magnet will be on show. Developed in collaboration with food processors, it was recently introduced by Dutch company Goudsmit Magnetics Group. 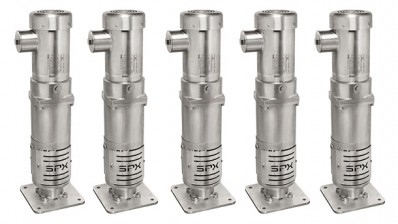 The latest Lightnin brand SanStar series mixers from US company SPX Flow have been specifically designed to meet the needs of the food and drink sector. 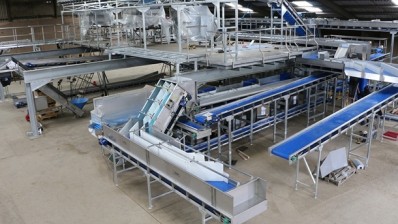 Vegetable and combinable crops processor MH Poskitt has installed a carrot handling line at its Goole facility in East Yorkshire. 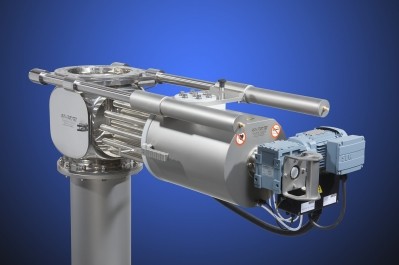 The Hydrohansu-type rotating clean-flow magnet has been developed by Dutch company Goudsmit Magnetic Systems in collaboration with leading food... 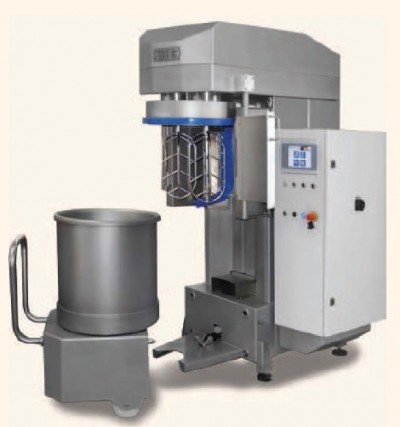 Italian manufacturer Polin has developed a range of planetary mixers for industrial bakeries that is said to offer a practical and cost effective solution for high-volume applications. 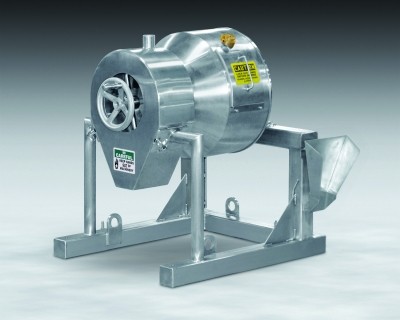 A miniature rotary batch mixer, which blends up to 28 litres of dry bulk ingredients, with or without liquid additions, in ratios down to one part per million in two to three minutes, is now available from Munson. 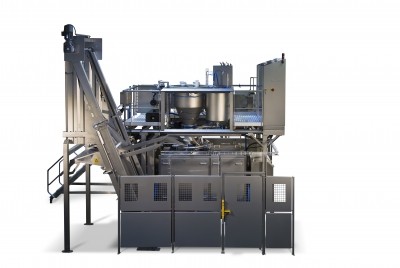 Mechanical dough developers range with capacities up to 200kg

Bakery equipment supplier Benier UK, part of the Kaak Group, has launched a range of mechanical dough developers (MDD) with dry weight capacities up to 200kg. 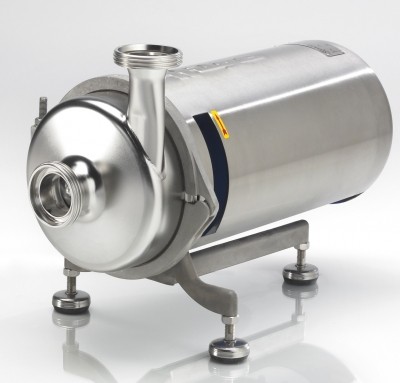 GEA has acquired hygienic pump supplier Hilge in a move designed to strengthen its position in the hygienic and aseptic process environments. 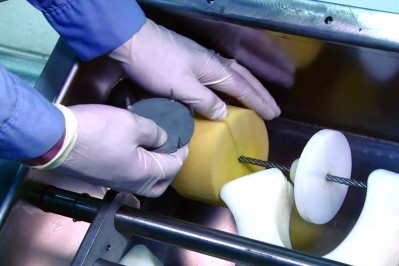 A new sanitary tubular cable conveyor for fragile bulk foods is available from Flexicon Europe, which allows rapid wash down between production runs. 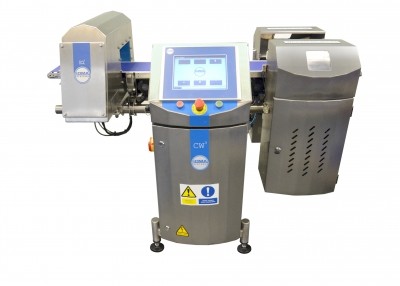 Quality control in a compact package

A range of super space-saving combination checkweighing and metal detection units has been introduced, which is claimed to have up to 30% smaller footprint than similar systems.

A new continuous ink jet (CIJ) printer - the A520i - has been launched by Domino, which can withstand the harsh dairy environment while delivering flexible, consistent and high quality coding at high speeds. 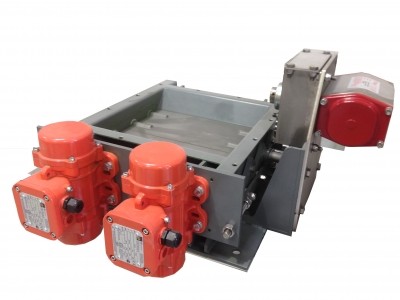 A new bin activator has been launched into the UK market that will help manufacturers eliminate material flow problems that can lead to potentially dangerous blockages in factory piping or tubing applications. 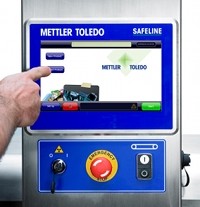 Mettler-Toledo says its new Safeline X-ray system gives the same high level of foreign body detection sensitivity as a traditional X-ray system but using only a fifth of the energy.

Packing line that handles with care

Swiss convenience food firm Fredag can now respond to urgent orders from retailers for special offer products in thermoform packs such as chicken nuggets since it installed a packing line based around an Ishida CCW-RS multihead weigher. 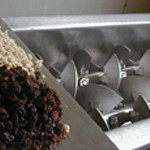 Fix the mix for organic granola

Darlington-based Acorn Dairies has recently installed a new shrink wrapper as part of an expansion and efficiency drive. 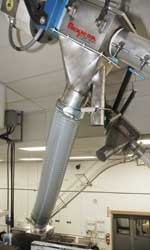 The combined application of Flexicon stainless steel screw conveyors and a range of bulk bag unloaders has helped manufacturers of the MaraNatha brand of organic and natural nut butters to increase productivity five-fold.

Multi-crumbed coat of many changeovers

The Stein Ultra V (SUV) breading applicator can handle flour-based applications and free-flow Japanese crumbs, with the ability to change from one to the other in under 10 minutes.

The Modular Box from Kingspan is a flat-pack walk-in cold store that combines high levels of performance with ease of assembly. The flat-pack store can be specified in any colour, including a stainless steel finish, and also offers a choice of thickness,...

To control flour and ingredients dust at the point of weighing in preparation for onward baking, Martins Foods Group in Manchester has invested in...

Stand up for stable air sampling

In response to customer requests to minimise the risk of costly accidental damage to microbial air samplers, Cherwell Laboratories has designed and...

Critical hygiene compliance and high reliability are offered by the new MH15V photoelectric sensors from Sick UK for the food and beverage...

Homogenise your laboratory samples in just a few minutes

Sample preparation can be a bottleneck in most food laboratories. But there is now an answer from Camlab - the Omni Prep homogenising station. It...

Liquids handling specialist Pump Engineering is offering a range of pumps for transferring liquids in dairy, food, pharmaceutical and other similar...

No mechanical seal, no leaks

A stainless-steel magnetic mixer/motor package for the food industries has been introduced by Advanced Engineering. The mixer is magnetically coupled...

The ICS pneumatic round cylinder from Bosch Rexroth is suited for use in wash-down applications. The cylinder meets all levels of corrosion...

AxFlow has introduced a new hygienic pump from Wilden that is capable of handling even the most demanding food applications. The 38mm Wilden PV4...

From curtain factory to food

From sausage making to salad preparation, Chalcroft Construction's dedicated Food Projects division (stand B45) can design and build a factory for...

Avery Weigh-Tronix has launched an ATEX-compliant weighbridge for use in hazardous areas in the food industry. The weighbridges can be used in zone 1...

Silverson is planning to launch a completely new range of in-line mixers which will feature hygienic aspects offered by the company's special order...

Easi does it with a Midilite

Easiweigh's new system might be targeted at start-ups, but it's certainly no lightweight when it comes to functionality.The compact Midilite, at just...

Easi does it at high speed

Easiweigh has introduced a new high-speed linear counter for fresh and frozen produce.Featuring what's described as "an intelligent optical eye...

The worm has turned

With the heat rising on demand for summer barbecue products, equipment supplier UFM has launched the first industrial grinder capable of processing...

Silverson has developed a unit for small to medium sized pilot-scale production of mayonnaise. The unit can carry out the entire process, including...

RHM frozen cranks up its production

Turbo Systems is targeting the food sector with its VP 100 transfer pump, which it says is ideal for products, such as soup, pizza toppings and ready...

Fast mixing times and complete product discharge are two features of the latest addition to the Kemper mixer range.The Power Mixer PM 150 D is a...

Cranswick’s bangers get all wrapped up

Cranswick Country Foods’ state-of-the-art sausage production centre, Lazenby’s, in Hull, is equipped with some of the latest processing...

Looking to increase manufacturing capacity for its range of frozen and chilled meals supplied to the foodservice sector, The Authentic Curry Company...

Diaphragms for hygiene -- and late customisation

Responding to the requirements for pumps suitable for hygienic applications, SPX Process Equipment has introduced a new addition to its ProCam range...

Freezelite is the latest development in Heinen Freezing's range of compact fluidised bed freezers for the cooling and freezing of bulk flow...

The ScanPortioner 36 portion cutter, from Scanvaegt, uses a servo knife motor and a fast-operating vision system to offer users in the fish industry...

Think outside of the box

Let the filler take the strain