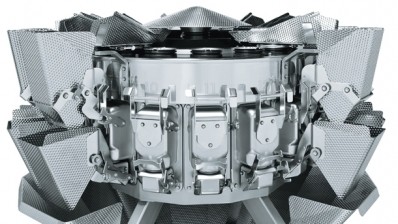 A series of mid-range multi-head weighers for the high performance weighing of free-flowing and semi-sticky products for dry, fresh and frozen foods, has been launched by Ishida. 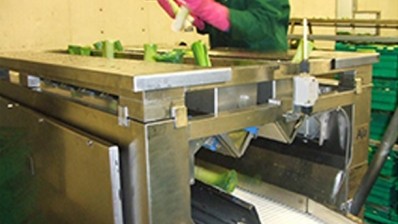 Pre-packed salad and vegetable packhouses across the UK – including leek suppliers – often use fixed weight weighing systems to minimise giveaway and waste. 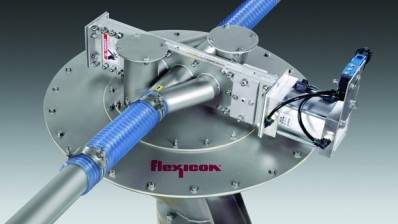 A new weigh hopper with fill/pass valve for dilute-phase pneumatic conveying systems has been introduced by Flexicon. 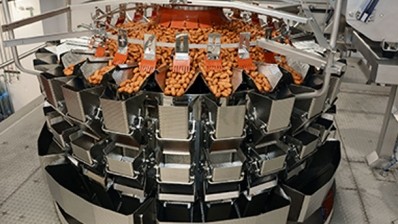 A bespoke line for handling 2.7t of frozen cocktail sausages every hour has been installed at Tulip's factory in Ruskington, Lincolnshire. 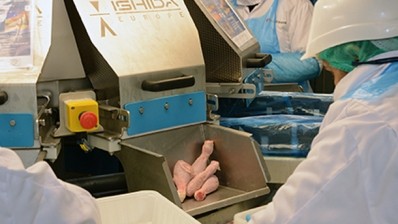 Chicken processor Faccenda Foods has installed a flexible and space-efficient system for the accurate weighing and packing of chicken legs and drumsticks. 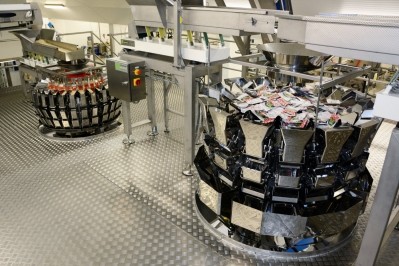 The project team at Ishida Europe has built what is claimed to be Europe’s fastest multihead weighing and packing line. 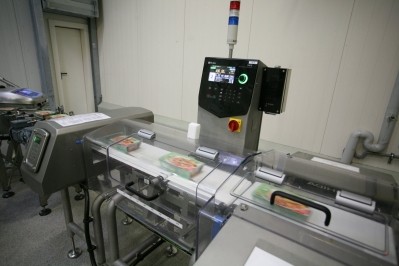 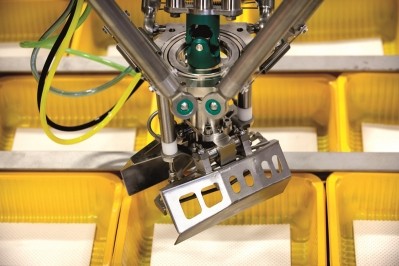 Robotic grader for fish and poultry

Weighing and packing equipment specialist Ishida Europe has extended its portfolio of kit for poultry, meat and fish packaging with the addition of a novel system that improves yield and efficiency. 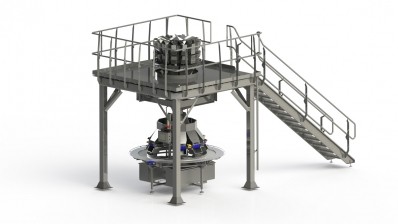 The latest developments in meat and poultry weighing, grading, packing and quality control were showcased by Ishida Europe last month (April 14-30) in a series of demonstrations at its UK headquarters in Birmingham. 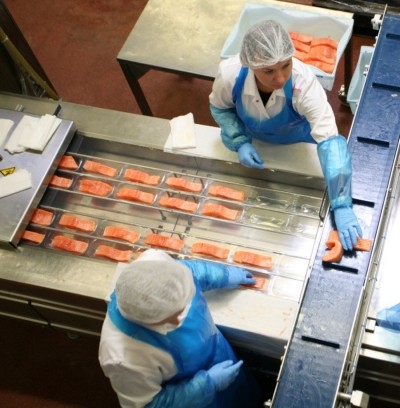 A bespoke weighing system has been developed by Ishida for German seafood processor Deutsche See Fischmanufaktur, which weighs just two large fresh fish fillets for a fixed-weight pack while keeping the overall weight close to target. 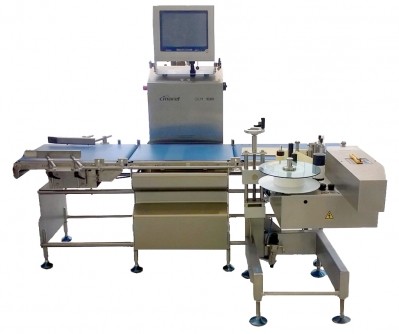 A box and crate labeller from Marel has been upgraded to extend its use to wet seafood processing environments. A waterproof chassis and indicator has been added to the OCM9500 so that it can withstand full washdown to IP69K, subject to the printer being... 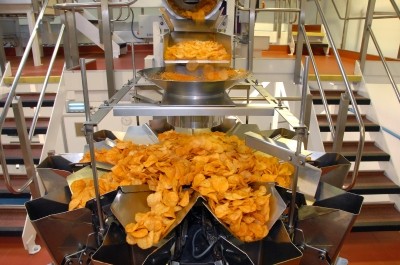 Weigher is crisp on accuracy

The latest Ishida multihead weigher to be installed at Pipers Crisps factory in Lincolnshire is a 14-head CCW-R series model in a ‘crisp’ specification to handle product quickly and gently throughout the weighing process. This new packing line also includes... 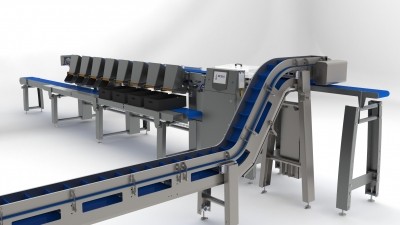 New grader is fast and flexible

Ishida Europe has launched a “smart, easy-to-use solution” for a wide range of meat, fish and poultry batching and grading applications. 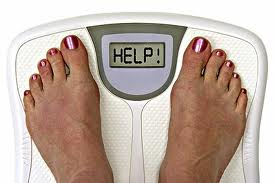 More than half of Britain – 29M people or 55% of the population – tried to lose weight in the 12 months to September 2013, while diet food sales showed only modest growth, reveals research from Mintel. 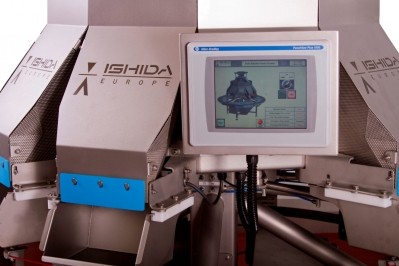 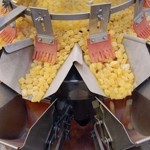 Rhokett has invested in Marco's Recipe Formulation Module (RFM) to bring a new level of control to the manufacture of its range of bespoke hand-crafted desserts. 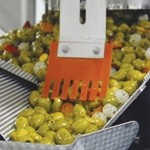 An Ishida RS series multihead weigher with a custom-designed distribution system is helping one of France's leading olive suppliers maximise market opportunities by handling product with an accuracy to within 0.1g.

Check weigh in the benefits

Ishida Europe will showcase its weighing and quality control equipment. Highlights will include the latest additions to its checkweigher and X-ray ranges, plus advanced weighing systems for typically hard-to-handle sticky and fresh products.

The Meyn-Ishida alliance has designed, supplied and installed a new 10,500 birds per hour (bph)plant for Russia's largest poultry producer, Zao Prioskolie - one that could expand to 12,000bph.

Ishida Europe has launched an enhanced version of its weigher designed for granular products, which can be easily damaged by auger or volumetric cup fillers.

Ishida has introduced a new 36-head multihead weigher for more accurate weighing of mixed products such as nuts, confectionery and convenience meals. 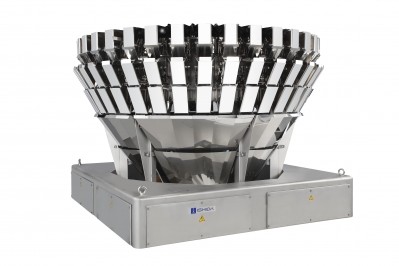 High-speed weighing of convenience meals, nuts and confectionery products is the idea behind the new 36-head, multi-head weigher from Ishida Europe.

It pays to automate weighing

German barbecue-ready chicken processor Stolle has improved the speed and accuracy with which sticky marinated chicken pieces can be weighed since installing an Ishida Screw Feeder multihead weigher.

The intelligent way to slice costs

Bizerba says the integrated weighing function of its A510 slicing machine is a world first: meat, sausages and cheese are weighed and sliced in exact portions according to the predefined weight. The software constantly compares the total weight of the...

Weigher doesn't give it away

Maintaining the right blend of wrap and sandwich fillings requires the optimum in line control. That's why Marco has installed its LineMaster yield... 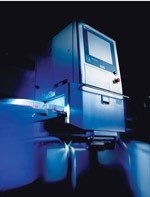 Quest for the bigger picture

PFM of Italy has announced a new range of multi-head weighers equipped with memory buckets to give 200 weighings a minute.The first of the C3 weigher...

Automatic weighers have their heads screwed on

Ishida Europe has extended its solutions for weighing and packing fresh, sticky products with the introduction of a new range of screw-feed...

Increased yield previously considered unattainable for salad products is one of the major benefits that German salad supplier Gartenfrisch Jung is...

A bespoke automated weighing and packing system from Ishida Europe is allowing Tryton Foods to automate the packing of its Aunt Bessie's Yorkshire...

Weigher that gives nothing away

Product give-away has been virtually eliminated in the new R series of multi-head weighers, claims Ishida Europe. With weighing speeds of up to 200...

How much would the mislabelling of one food pack cost? With recalls, shut downs and lost business, the total is probably incalculable, yet many major... 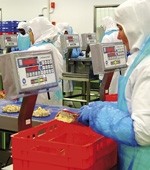 Improving efficiency and making a profit while keeping customers happy is a tall order, but one that can be met with the right equipment, as John Dunn discovers

Inter Link weighs in to Poland

Speed was the order of the day when Stevens Weighing Group won an order to supply and install a multi-station Vantage recipe formulation and...

Berger Wild, based in Passau, Germany, is Europe's largest processor of European game and, among other products, supplies 2.5kg and 5kg bags of cubed...

That's a weight off Baxters' mind

Hygiene and weighing go together

Scanvaegt's multihead weigher has been developed to stay grime-free

The installation of an Ishida Fresh Food Weigher at a meat processor has raised weighing accuracy and production efficiency on a range of marinated...

Printing, labelling and coding: labelling without the labels