Unite is seeking assurances that UK jobs will be unaffected by the merger, which is said to create the globe’s fifth largest food and drink company and the third largest in north America.

The new company will have revenues of about $28bn with eight brands worth more than $1bn and five brands valued at between $500M and $1bn.

Unite national officer for the food sector Julia Long said the union was seeking urgent meetings with Heinz management about the security of members’ jobs. “We also want to know what the combined company’s future business plan will be for its sites in the UK,” ​said Long.

“We and our trade union colleagues in the food industry around the world know from experience that deals like this often involve job losses and ruthless cost-cutting, as global capital wants a quick return on its investment.” ​

The fact that shareholders were “hosed down with cash”, ​while workers were kept in the dark was concerning, she said. Shares in Kraft jumped more than 40% after news of the merger emerged today (March  25).

Unite has more than 1,000 members at the Heinz site at Kitt Green, Wigan, which is Europe’s biggest food factory manufacturing more than 1M cans of beans, soup and other products each year. The union had nearly 1,300 Heinz members across UK and the Republic of Ireland out of a total Heinz workforce of 2,500.

‘My kind of transaction’​

“This is my kind of transaction, uniting two world-class organisations and delivering shareholder value. I’m excited by the opportunities for what this new combined organisation will achieve.”​

Buffett said he was delighted to play a part in bringing the two companies and their iconic brands together. “This is my kind of transaction, uniting two world-class organisations and delivering shareholder value. I’m excited by the opportunities for what this new combined organisation will achieve,” ​he said.

Kraft chairman and ceo John Cahill said: “This combination offers significant cash value to our shareholders and the opportunity to be investors in a company very well positioned for growth, especially outside the United States, as we bring Kraft’s iconic brands to international markets. We look forward to uniting with Heinz in what will be an exciting new chapter ahead.”​

Chairman of Heinz and managing partner at 3G Capital Alex Behring, said: “By bringing together these two iconic companies through this transaction, we are creating a strong platform for both US and international growth.”​  ​

Meanwhile, the boards of both firms have unanimously approved the deal. But before the merger can go ahead, it requires the approval of regulators and Kraft shareholders. If forthcoming, the deal is expected to be completed in the second half of this year.

Berkshire Hathaway scooped up Heinz for $23bn in 2012 and took the firm private a year later. 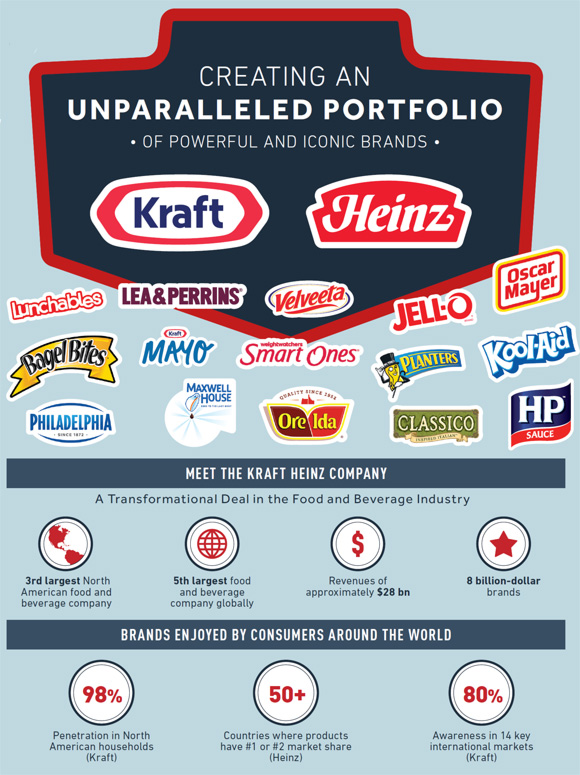